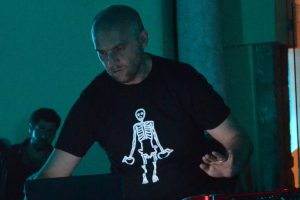 Damiano Meacci in a live performance at Festival Flussi 2011

Musician, composer, researcher and live electronics expert, he fulfilled his studies at the Music Conservatory of Florence and Bologna (Italy). Since 1996 he collaborates with Tempo Reale as a member of the production staff; in this context he worked on the production of Berio’s last works with electronics at Teatro alla Scala on Milan, Châtelet Theatre in Paris, Queen Elisabeth Hall in London, Ravenna Festival, Carnegie Hall in New York, Kioi Hall in Tokyo and Auditorium in Rome. Still within his cooperation with Tempo Reale he worked on the production of big sound installations and musical events of various nature. He has also collaborated with great national and foreign artists like Battistelli, Jim Black, Caine, Guarnieri, Van Hoecke, Daniele Lombardi, David Moss, Pier’alli, Pousseur and Ronconi and he supervised the performance of works from the greatest composers from the 20th century.
His artistic production is oriented to soundscape composition for tape music and for live performance. Since 2007 to 2013 he was Electronic Music teacher at the Music Conservatory of Avellino and now he is Informatics Music teacher  at the Music Conservatory in Bologna.